2023 Toyota Corolla Cross in Hamilton, ON

Toyota is always pushing its lineup forward, and there’s no better evidence of this than with the 2023 Toyota Corolla Cross. That’s right, the iconic Corolla now arrives in a crossover SUV form, providing that same style and dependability in an even more versatile package. Read on with our team at Upper James Toyota and explore the many highlights of the Corolla Cross, from its design to its performance to its loaded tech. Get to know this revolutionary new vehicle, then order one, today. 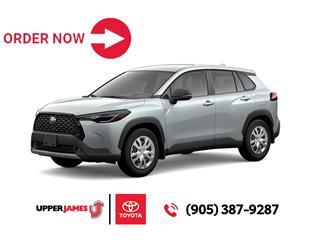 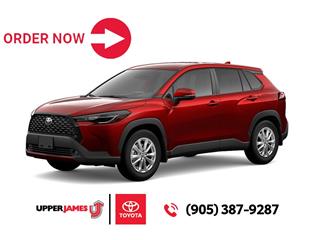 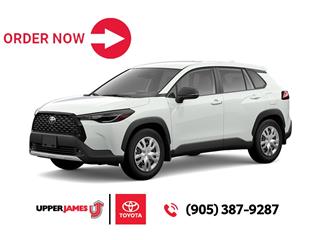 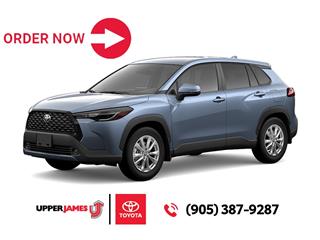 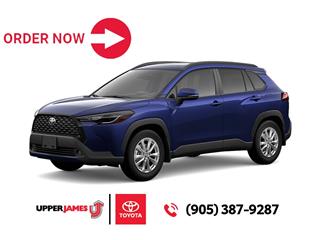 The Corolla Cross is a unique vehicle with a mix of styling you may recognize, along with a new level of dynamic aesthetics to celebrate this fresh take on a classic Toyota model. You won’t be able to miss its black grille flanked by the sleek LED headlights. From there, the fender arches flair out and create flowing lines toward the rear, ending with an integrated rear spoiler and distinct lighting features.

Make your Corolla Cross even more unique with a choice across a wide variety of stand-out paint colours. Choose from the following:

Take full advantage of the Corolla Cross and its crossover style with its spacious room for both passengers and cargo. Its 60/40 split-fold rear seats can open up into 440 L of space for your luggage or cargo. To make loading even easier, the rear doors have been made wider, along with a low cargo-loading height.

The beauty of the Corolla Cross and its versatility is that it’s ready for any kind of adventure. Whether that be the basic kind in just grabbing some groceries or if it’s a weekend adventure to explore our beautiful Ontario countryside. Features making all of these drives comfortable include heated front seats, a leather-wrapped steering wheel (available), Softex seats (XLE) and more.

To meet the needs of the modern driver, vehicles need to be smarter than ever. The Corolla Cross comes loaded with a wide variety of smart features. These include:

Audio Plus with Remote

Take your connected Toyota Corolla Cross features to the next level on the XLE and LE Premium package with Audio Plus with Remote. It adds on the following features:

The top-level XLE trim, as you’d expect, maintains the best Corolla Cross features, including audio. Enjoy high-quality audio thanks to the nine-speaker JBL sound system. Make your next playlist or podcast listening experience one to remember.

The 2.0L 4-cylinder DOHC 16-valve engine of the Corolla Cross reaches 169 horsepower with ease, a welcome result when you press down on the accelerator. Additional efficiency features ensure you get the most out of every tank and make trips to the gas station farther and fewer between, thanks to dual variable valve timing (with intelligence) and a stop-and-start engine system.

Dynamic Torque Control All-Wheel Drive keeps you in control no matter the weather or conditions that our Hamilton roads may throw your way. Up to 50% of power is able to be directed to the rear wheels when traction support is needed. When not needed, that power stays up at the front to maintain terrific fuel economy.

A smooth ride starts with the platform that the vehicle was built upon. New on the Corolla Cross is a torsion beam rear suspension for the FWD models and a fully independent double wishbone rear suspension for the AWD models. Adding to its comfort is its perfection in handling city streets, thanks to a slight 5.2-metre turning radius.

Each and every Corolla Cross model comes with Toyota Safety Sense 2.0, a suite of intelligent safety features here to provide you with the safest and most convenient ride possible. These features include:

The vast majority of us dread parallel parking and may even try to park anywhere else just so we don’t have to execute the maneuver. Let the Corolla Cross get you comfortable with parallel parking with its Intuitive Parking Assist. Cameras and sensors will help you navigate tight spaces, and help guide you in, so you can parallel park like an expert in no time.

Blind spots are a constant pain when driving, but the Blind Spot Monitor of the Corolla Cross always keeps you up-to-date with any vehicle that may have hidden itself where you can’t see. As well, Rear Cross Traffic Alert provides warnings when backing out of a spot of any approaching traffic.

The 2023 Toyota Corolla Cross is an all-new model in the Toyota lineup, based upon the classic Toyota Corolla car model. It conveniently fits between the C-HR and RAV4 when comparing its size, providing a new option for those shopping in the ever-popular crossover segment. Stay tuned to see what this exciting new model has in store for 2023 and beyond.

Ready to experience the all-new Toyota Corolla Cross for yourself. Get in on the ground floor and get a 2023 Corolla Cross in its debut model year. Our Upper James Toyota team can help you shop and order this monumental new entrant in the Toyota lineup. Be sure to also check out our service and parts departments for all of your needs throughout your Toyota vehicle ownership.